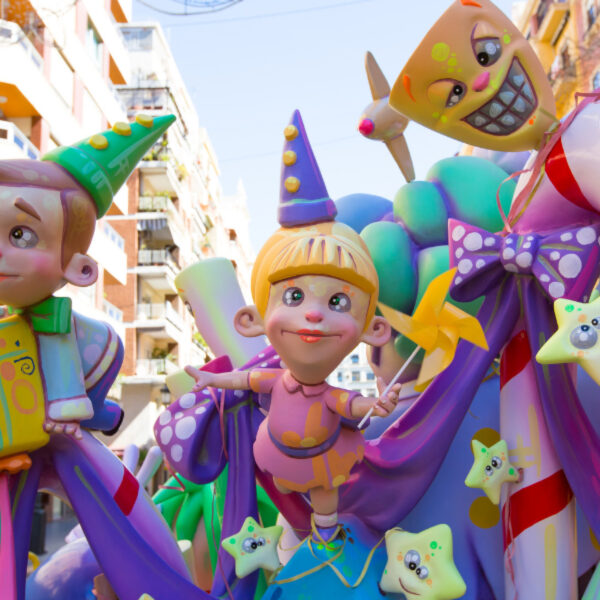 Learning Spanish requires more than just classes and regular practice. In-depth knowledge about the key aspects of the Hispanic culture is an important part of the learning process.

At Spanish Express, we are committed to providing you with all the tools you need to improve your Spanish. That is why we not only give you pedagogical material, but also bring you a closer look at the best that the Hispanic culture has to offer.

This time we’ll take a closer look at Las Fallas de Valencia (The Falles Festival). Have you heard about this fun festival? If you haven’t, don’t worry,  we will tell you all about it here!

Are you ready to discover more about this celebration? You are guaranteed to want to come and party with us after learning about it!

Before Valencia adopted this festivity, the Fallas were mainly recognised as a fire ritual. Within this type of ritual, flames symbolize renewal and rebirth, achieved by burning the old to give way to the new.

In the 16th century, the word “falla” was used to refer to the fire that was made on the ground at the centre of a gathering or party, which usually served as lighting.

Over time, this word changed its meaning, as the fire started being made with unusable furniture and junk that carpenters burned in front of their workshops, on the public streets.

Thus, the origin of the Fallas dates back to the ancient tradition of the carpenters, who burned the wooden contraptions they used to raise the torches that illuminated them in winter while they worked.

This act of burning wood was carried out on the eve of the feast of their patron saint, Saint Joseph.

In the 18th century, the custom of burning dolls or “ninots” began to be registered in some localities of Valencia. These represented characters that people intended to criticise or censure for their wrongful actions or words.

However, it was in the 19th century when the name “Falla” was also used in Valencia to celebrate this festivity. The citizens took an artistic and satirical monument to the street to burn it the night before Saint Joseph’s Day. The festival was celebrated in different areas across the city, being called “Las Fallas de Valencia” in plural to honour the saint.

Each artistic monument or “falla” bears the name of the most representative neighbourhoods within that city. There are different categories of fallas that compete with each other for various different prizes.

The monument of each falla has one, two or three gigantic figures that can measure up to twenty metres in height, made of cardboard, wood and paint. Their figures represent current social and political issues either ironically or critically, but always with a lot of humour.

On March 15 the fallas are planted, and it is finally the day of the festivity!

The protagonists of the festivities are the music, the smell of gunpowder and the public participation. These elements have all given the festival its well-deserved fame all over the world. Everyone wants to come to celebrate Las Fallas de Valencia!

The music, played by bands, accompanies the falleros (Valencians dressed in regional costumes) to events such as the Offering of Flowers to the Virgen de Los Desamparados, on March 17 and 18.

The mascletàs are fired in the Town Hall square every day at two o’clock in the afternoon, along with fireworks over the castles on the night of March 18.

On March 19 the celebration ends by setting fire to all the Fallas monuments at midnight on March 18.

Las Fallas de Valencia has been declared a Festival of International Tourist Interest and recognized by UNESCO as an “Intangible Heritage of Humanity”.

The magnitude of this celebration translates into an unparalleled explosion of culture. The colours, the music and the joy of the people are the main attractions of this celebration, which closes in style with an unforgettable flame show.

Let’s test your knowledge with this interactive activity:

Come to Valencia and celebrate Fallas with us!

If you want to experience this celebration in person, make your dream a reality by becoming part of our Spanish Homestay Immersion Program (SHIP)!

At Spanish Express, we have taken the utmost care into combining fun and learning into one program, making sure you have the best experience whilst learning Spanish.

Our SHIP is can now bring you to Las Fallas de Valencia, as we have set up a program in this beautiful city. Not only will you get to experience this unforgettable celebration in person, but you will also be learning Spanish in the process.

Get to know the culture of Spain in person while constantly improving your Spanish. Our methodology combines the best of both worlds.

In addition, we have other destinations available such as Barcelona, Mallorca and Málaga. Soon we will also have Madrid, Menorca and Navarra.

The best thing about this program is that you can live and study Spanish in your teacher’s home!

If you want to explore Spain with us and leave with invaluable knowledge of the language, the Spanish Express SHIP has opened its doors open to embarking all knowledge-hungry travellers. We are waiting for you!