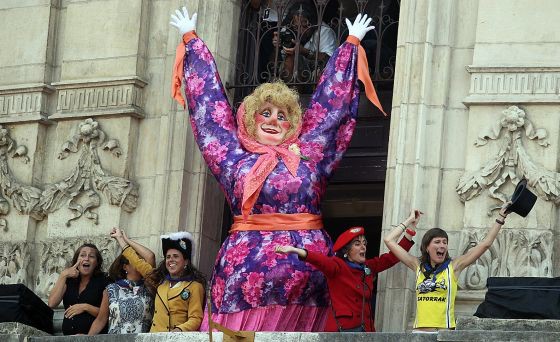 The Aste Nagusia, Semana Grande, or Big Week is the largest festival in northern Spain in the Basque Country,

dedicated to the Virgin of Begoña, affectionately known as Amatxu, or Mother. This is a celebration of Basque heritage, as well as religion.

This festival is a 9-day event held at the end of August when a rocket shoots into the sky and the festival mascot Marijaia makes her appearance on a balcony of the Arriaga Theatre.

ORIGIN: This festival was born in 1978 when the Town Hall through a contest wanted to update the poor, old Big Week organized by the dictator Franco, and organize a new modern festival.

FESTIVAL: The Big Week is the result of the joint effort of various party groups, called comparsas in Spanish. Currently, there are 28 comparsas in Bilbao.

The Big Week is opened by the herald called “chupinera”. The herald is chosen from the female members of the comparsa that had won the lottery held by the festival organizers.

She is responsible for launching the rocket announcing the beginning of the festivities (known as the txupinazo). The herald wears a special uniform similar to the uniform worn by the Carlist troops during the siege of Bilbao.

The official symbol of the Great Week is Marijaia. It is a figure of a plump lady with her arms raised as if she’s dancing. Marijaia makes her grand entrance onto the balcony of the Arriaga Theatre, right after the rocket is fired, and accompanies the festivities throughout the festival.

On the final evening, the figure is burned in the square in front of the theatre.

Music is one of the most important parts of the festival. Concerts take place throughout the entire Big Week with renowned musicians like Baccara, Coldplay, Guano Apes, Iggy Pop, and The Stooges, Manu Chao, Pet Shop Boys, Safri Duo, The Prodigy, and much more!

You can find out more about our cultural excursions and homestay courses here.

Read all of our blog posts here.

Christmas in Spain and Latin America: how is it celebrated?