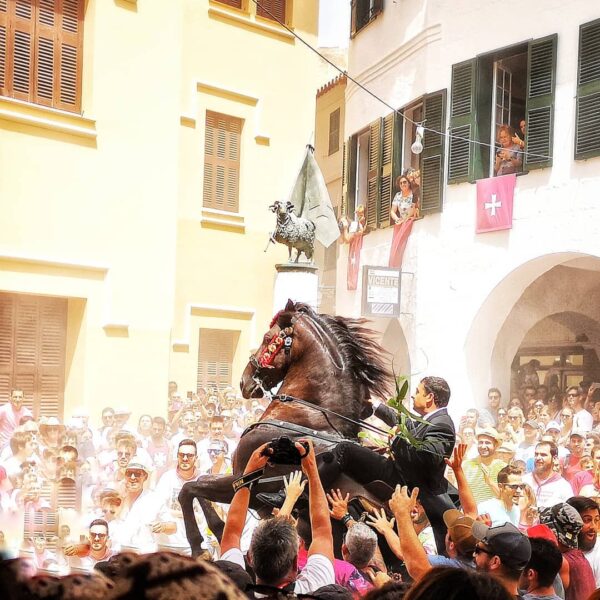 One of the most emblematic festivals in Spain have been cancelled

“Ses festes de Sant Joan” de Ciutadella de Menorca, Balearic Islands, Spain, make up one of the most iconic, spectacular and participatory festivals in Spain, not only in the Balearic Islands.

This festival is full of history, tradition, and love for our land, and passion for our traditions and customs.

Where and when does it take place?

This festival is held each year at the summer solstice 23rd and 24th June, and the Sunday before, in my home city, Ciutadella, the old capital of the island.

Of all the festivals in Spain, this is a particular one for being full of palaces which are transformed when skillful riders and beautiful horses, festooned for the occasion, take to the streets to become the stars of the festival, which are spread over a few days that happen to be the most important days of the whole year.

A little bit of history

The history of the festival is very little known outside the island. It is one of the festivals in Spain whose origin dates back to the fourteenth century, in the middle Ages, and has evolved from religious rituals.

The devotees of Sant Joan formed a committee to conserve and maintain the hermitage of Sant Joan d’Artrutx (Sant Joan de Missa), a sanctuary to which they made pilgrimage accompanied by the best part of the town.

The procession was formed mainly of “Cavallers” (peasants of all ages), and “Caixers”, who represented the different strata of society – church, nobility, artisans and peasants – gathered in the so-called “Junta de Caixers”.

This pilgrimage has evolved over time growing both in the number of participants and in the length of the festive activities.

Key days of the festival

The eve of the Sunday before the 24th June

The specially selected Menorcan ram from the farm of the Caixer Pagès, which has been prepared and thoroughly washed during the seven days beforehand, is watched throughout the night by the townsfolk to make sure it stays clean. It is then taken away to be adorned with ribbons and bows.

The Sunday before the 24th of June (known as Diumenge des Be), a group of caixers and the fabioler accompany a barefoot man dressed in lambskin pelts with a live ram draped over his shoulders, around the streets to announce the start of one of the most important festivals in Spain.

The eve of the Sant Joan district, Ciutadella, like many Mediterranean cities and towns, celebrate the evening around bonfires. It is a magical evening, in which the light of the bonfires, called “festers”, accompanied by popular ballads, traditional food, and some concerts with local groups providing musical entertainment, illuminates Ciutadella.

At 2 pm, the “fabioler” will gather the set of horses and riders, called “qualcada” that will participate in the parade to enter together the Plaza des Born at around 6 pm. This marks the beginning of the most significant part of the festivities: the “Caragol des Born”.

Afterward, we all go to “Sant Joan de Missa”, one of my favorite places, from here, you can see the parade in a more relaxed atmosphere, and you can stroke the horses and have a picnic with your loved ones.

At night, the “Caragol de Santa Clara” takes place. In days gone by this trip was made to greet the nuns who lived in the convent, but nowadays people enter different houses with the permission of their owners while the kids and the big kids (including myself) engage in the ‘sa capadeta’ (cherishing the horse’s head).

The day begins at 8am in the morning with the “fabioler” playing his instrument and announcing that the festivities have begun and that the “Qualcada” will gather and will carry out the trials for the games that will take place in the evening.

The traditional “Mass des Caixers” takes place in the afternoon, I love going to mass, it makes my eyes water, I find this event emotional and overwhelming.

In the evening, the famous “Jocs des Pla” (Pla games) will take place. During these, the riders will once again display their skills on their beautiful Menorcan breed of horses.

The most popular games are “Rompre carotes” and “Ensortilla”. The first consists of watching two riders race in parallel; while one of them is holding a mask, the other one will try to break the mask with a stone. Be aware that when this happens the crowd will all rush at once to grab a piece of that mask.

In the second one, the “Ensortilla” the riders gallop with a lance in their hand from one end of the square. At the other end of the square, you can see a ring hanging from a cable that the rider will try to pierce with his lance. Absolutely amazing!

Once the games and the “caragols” of the afternoon have come to an end, the “qualcada” will be collected to end the festivities with one last “caragol”, the one of “Santa Clara”. How beautiful is our Ciutadella and the festivals in Spain!

Musical performances take place at different venues around the city. At around 11pm, a spectacular firework display over land and sea takes place, which is the grand finale of the festival and is watched by thousands of people.

More information about this festival

Today, the Committee of ‘Caixers’ is elected for a period of two years. Each member plays a key role in the fiesta and is dressed strictly in formal attire, representing the ancient society of Ciutadella, which consists of:

The true stars of the festivals in Spain

Without a shadow of a doubt, the magnificent black Menorcan horses play one of the most important roles, with their shiny coats dressed up with ribbons and rosettes and mounted by proud cavaliers (equestrians) in their matching black costumes.

The Menorcan horse is a breed of horse indigenous to the island of Menorca, from which it takes its name. These horses feature finesse and elegance, nobility, skill, and discipline and they were officially recognized as an indigenous breed in 1989.

We, Menorcans are so devoted to our horses that even during the excitement of the festival, these animals are treated with care and great respect by us all, we like rolling out the carpet for our heroes. Is it this one of the greatest festivals in Spain?

The flavours of the festival

Homes and bars prepare bottles of the Menorcan gin – Gin Xoriguer – with lemon “gin amb llimonada” along with traditional food such as ensaimadas, pastissets, and coques de sobrassada as well as local cheese, all ready to share with friends and family during the festival.

No festivals in Spain are complete without the Jaleos. This is where the excitable music riders will rear up their mounts and walk on horseback through the crowds as the brave try to touch the horse for good luck.

With that note, and with sadness but with hope, till next year, Sant Joan!

Have you ever wondered what it would be like to fully immerse yourself into another culture? Wanted to live and study as if you were really living in a Spanish-speaking country? We have the right Spanish immersion programme to make that dream a reality!

At Spanish Express, we understand that everyone has their own unique way of learning, and therefore we strive to offer courses tailored to all types of learners.

Building on this ethos, we are proud to offer ‘Live and study Spanish in your teacher’s home’ which is a collection of courses designed by our teachers to help you embrace your language skills through a cultural experience in various Spanish locations.

*All photographs in this article have been taken by Xec Bagur Florit, one of my very best childhood friends, which not only has an important place in my heart but is also a great photographer. You can check his Facebook page here.

: Aprender español, Español, Estudiar en España, hablar Español, Spanish, Spanish traditions
Previous Post Why being bilingual at any age is an advantage for us Next Post SOS… I need a Spanish keyboard! How to change your keyboard language in one minute