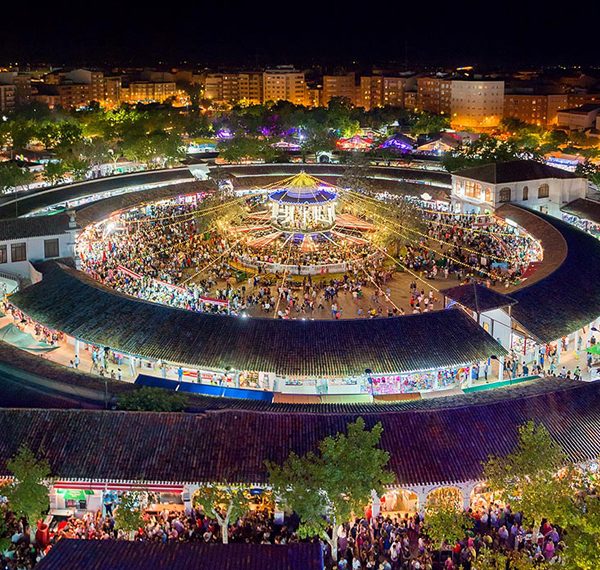 The grand Albacete festivity, known as the Fair, takes place in the permanent fairground commonly known as ‘the pan’ or ‘the circles’ situated near the center of the city since the 18th century.

The opening parade, with regional costumes, music, and food on the streets, takes there the Llanos Virgin, patron saint of the city. The Flower Battle is only the beginning. Afterward, and during 10 days, the festivity goes on 24 hours a day with all imaginable activities, to suit all tastes and ages: concerts, bullfights, theatre, sports, among others.

As a precedent of the Albacete Fair, there were found some testimonies of the 15th century which talks about a regular market held in Feria’ Street. This street still preserves its name until our days.

Philip V, in 1710, gave the city the privilege of a franc fair for 4 days from 7th to 11th September

The Albacete Fair was inaugurated on 7th September 1783 and completely finished the next year. From that date, the fair was held in the urban center of Albacete. Lately, the Fairground Building was the object of many ampliations and reforms. The last one date of 2010 due to the 300th anniversary.

The Albacete event started life as a cattle fair, but evolved over time to become a festivity with immense popular participation. It is performed in honour of the Virgen de los Llanos and has a varied programme: concerts, theatre, popular dancing, activities for children, parades, bullfights, sporting competitions and more!

The celebrations start off with two events: the proclamation of the queen of the festivities (known as the “Manchega of honour”) and the Inaugural Parade, a colorful procession of floats featuring numerous clubs and associations, accompanied by typical brass bands and groups of

musicians, and people attired in the traditional folk costume of La Mancha. This great parade may last several hours. Another emblematic act is the floral offering to the patron saint.

The festive atmosphere is centered around the fairground and the nearby area. Because of its peculiar shape, this area is known as the redondeles (the circles) or the frying pan. It was laid out in the 18th century and consists of three concentric circles and a lengthwise walkway that provides access.

In the center of the frying pan is a charming Modernist pavilion, and in the various rings, there are all kinds of stands selling food and drink, traditional handcrafts from Albacete, toys, clothes, and costumes jewelry.

The stands remain open all day through to the small hours of the morning, and many of them serve cider with “miguelitos”, a typical local sweet which is absolutely delicious. During the day you can also see processions of carriages and horses.

The distribution of the Albacete Fair has different parts:

At the beginning of the walk, several tombolas and games are installed. It is well known the Cáritas Tombola, traditionally managed by Cáritas for benefic causes. Its prices are donated and workers and volunteers do the jobs. Its origin starts in 1953 when it was created to build houses for the working-class people. After the tombolas, there’s a children attractions area, and at the end some food marquees.

After the walk, we enter a place surrounding the Recinto Ferial, where back in the day’s cattle was sold. It lost that use when the machinery was started to use in the fields.

Nowadays, starting on the right side, we find mobile companies and television stalls, a music marquee, and other bigger attractions. If we keep walking we find the marquees for rock music that every day hold free concerts. Around the fair building, we find some other craftwork and toys marquees

Every day there’s a party in the fair building, especially in the inner circle where, until 2007, every early morning, the toro de fuego of Barrax make the fun last. This bull was a cart hold by a person with some firecrackers in the horns. It was removed due to its potential danger.

If we want to keep the party on, the marquees located in Los Ejidos are still open until the early morning. At the end of the main walk of the pan, there are several stands where different associations and commerce make their exhibitions of products from different parts of Castilla la Mancha. One of the typical things of La Feria de Albacete, is the Miguelitos de la Roda, a puff pastry filled with custard and powder sugar on top.

There is also a big knife exhibition opened to the public with great art pieces of the knife’s Albacetenian industry. A custom very extended among families in Albacete is the feria something to kids and friends, which is, making a present after walking along with the marketplace of La Feria.

To visit the Fair of Albacete is to know the authentic tradition of La Mancha. DON’T MISS IT!

SOS… I need a Spanish keyboard! How to change your keyboard language in one minute

From Brick Lane to Malasaña – By Nacho

London is HOME! – By Nacho