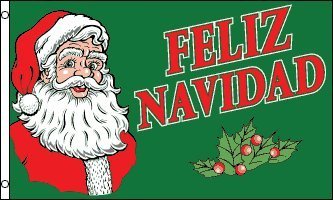 Christmas Holidays in Spain – By Pilar

Christmas is known as ‘Navidad‘ in Spain and is celebrated passionately every year. The celebrations begin on December 8th with the ‘Feast of Immaculada‘.

On the 22nd of December, a lottery is drawn and everyone in Spain purchases tickets to win the ‘El Gordo‘. Christmas Eve or ‘Nochebuena‘ is a special day when Spanish folks attend the ‘Mass of Rooster’ at church and then return to spend quality time with their families and friends at home.

On this day, people prepare a grand feast, which is consumed after midnight, and then, they sing Christmas carols. On Christmas Day, the people in Spain spend their day at Church, and traditionally, the children perform the ‘swinging’ ritual.

The ‘Feast of Epiphany‘ is held on January 6th and on this day; children in Spain receive gifts from the ‘Three Wise Kings‘. Scroll further to learn more interesting information about Christmas in Spain.

Christmas or ‘Navidad‘ is a festival that is religiously celebrated in Spain. This day is not a flamboyant affair like in other countries and is usually a soft event. The holiday season starts on December 8th, which inaugurates and celebrates the feast of the ‘Immaculate Conception‘.

This celebration in Spain only begins during the second half of the month of December. During this period, the streets and towns are decorated with Christmas adornments.

The Tradition of ‘El Gordo‘

On 22nd December, a Christmas lottery is held as a part of the celebrations. People in Spain buy tickets in the hope to win the ‘El Gordo‘ (the biggest prize), along with obtaining small prizes.

Apart from being a traditional festive, the ‘El Gordo‘ is also a matter of pride and prestige for the people of Spain.

During December, people assemble a model manger with carved figures of the Holy family, the angels, the Three Kings, shepherds, and animals to form the Nativity scene or ‘Nacimento‘.

Spanish families gather around the manger to sing, while the children dance and play the tambourines. The people in Spain respect and honour the cow as they believe that Baby Jesus was warmed by the cow’s breath.

Hence, the cow is also revered, while setting up the Nativity Scenes.

When the stars appear on Christmas Eve, the people in Spain start lighting oil lamps as a part of ancient customs. In Spain, Christmas Eve is known as ‘Nochebuena‘, which means ‘the Good Night‘.

On Nochebuena, the church bells ring and families are summoned to the church for ‘Misa del Gallo‘ or ‘Mass of the Rooster’. After attending mass, families get together and indulge in a wonderful feast at home. Gifts are exchanged at this point in time.

‘Turrón‘ is an important Spanish Christmas treat. A bottle of Spanish champagne known as ‘Cava‘ is a favored drink and is popularly used for Christmas toasts.

The Christmas feast is not consumed until midnight, as the Spanish believe that consuming it earlier, may bring bad luck. After dinner, the family members gather around the Christmas tree to sing Christmas carols, recite Christmas stories and hymns.

Spanish folks spend Christmas Day at church. One peculiar custom includes the custom of ‘swinging‘ the children. Swings are built around the church courtyards and the youngsters swing, sing, and laugh with joy.

It is symbolic of cheerful times to come in the following year.

According to Spanish legends, the ‘Three Wise Kings‘ or the ‘Magi’, gift presents to the Spanish children on the ‘Feast of Epiphany‘, which is on January 6th.

Melchior, Gaspar, and Balthazar are the three legendary Kings who followed an evening star, to guide them to Baby Jesus. Little children are asked to write letters to the Three Kings for gifts.

Children fill shoes with barley, carrots, and straw and place them on balconies, doorsteps, or on windowsills on the ‘Eve of Epiphany’ to feed the camels who carried the Three Wise Kings.

The next day, the barley is replaced by treats and small toys. Today, one can witness the Three Wise Kings visiting and gifting children in orphanages and hospitals too.

On the morning of the ‘Epiphany’, a special cake called ‘Roscón‘ is shared among the family. This cake is shaped in the form of a roll (Yule Log) and flavored with cream. Dishes made from the freshest seafood are the main food for Christmas feasts.

Some of the activities during include dancing, lighting candles, musical events, and the preparation of a grand feast.

Spanish Online Platform: learn Spanish online at your own pace

A-Level Results: The next chapter! – By Tiff