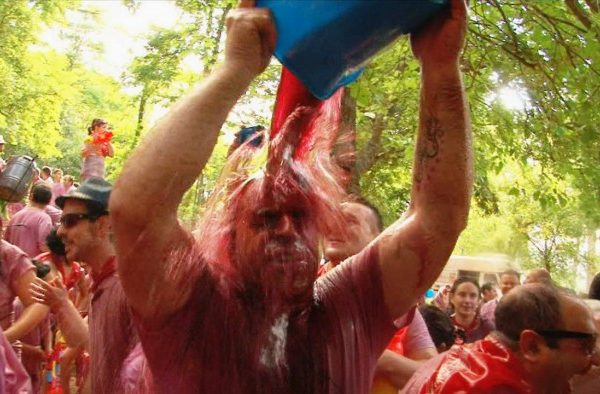 The Wine Fight takes place on the 29th of June each year in La Rioja, Spain.

The Wine Fight takes place on the outskirts of Haro, a small wine-producing town that is one of the most important in Spain’s La Rioja region.

La Rioja is world-famous for producing red wine that can be found all over the world, and the town of Haro is home to 40% of the entire region’s vineyards. Wine is

a big deal around here.

It makes sense then that every year the locals of Haro celebrate San Pedro with the Haro Wine Festival, a week of drinking and music that is now world-famous due to the Wine Fight (Batalla de Vino).

When did it start?

The start of the Wine Festival finds itself in the 13th century when the Haro had to officially mark the property lines between them and their neighbors in Miranda de Ebro.

This had to be done every year at Saint Peter’s Day as well as every first Sunday of September, or else Haro would become a part of Miranda de Ebro. 400 years later, the observation broke down and people started throwing wine at each other.

That day the tradition started and earned the name “War of Wine”, which in 1965 was changed into Battle of the Wine, or Batalla del Vino en Haro as it’s known in Spanish.

While the mass and feast still takes place and is regarded as a huge part of the town’s history, the main attraction these days is the pouring of wine on each other and into each other’s mouths.

Nowadays everyone is supposed to be clothed in white shirts with a red scarf. Once everyone has arrived, the city banner is unfurled on the highest rock, which shows the beginning of a religious mass.

In the morning the Wine Battle happens. All weapons are allowed during this outrageous battle: buckets, wineskin, sprayers, and anything else that can be used to hurl, spray or launch thousands of liters of wine all over the crowd.

After battling for some hours, around midday everyone heads back to Plaza de la Paz, where the celebration continues with lots of food, drinks, and people.

Later in the evening activities take place in the town’s bull ring. The bulls used are actually smaller female heifers known as “vaquillas”, which are much less dangerous than male bulls and are used to entertain the general public by chasing people around. The bulls at this event aren’t killed.

Wine for breakfast in La Rioja

This party gets started early and the people of Haro don’t mess around. We are talking 7 AM, sharp! The mayor leads a procession on horseback, followed by a crowd comprised of all (legal) ages, led through the town.

You don’t come empty-handed to this wine war, and your weapon is a traditional bota bag, a traditional Spanish leather wine satchel lined with a goat’s bladder.

Sling it over your shoulder and you have easy vino access all day. The power of the bota is its ability to be squeezed to jettison streams of red wine as far as you can shoot it.

You might also see squirt guns, spray misters, and wine-filled balloons. We say go local and use a bota, but not until a ceremonial Mass takes place at the Hermitage of San Felices de Bilibio. Amen and Hail Mary!

The grapes of wrath

At the Hermitage, there’s a building group of people, wine and wine inebriated people. After mass the crowd lets loose, flinging the wine around in every direction. The best way to appreciate it is to soak it all in–literally.

Your white clothing will transform into a purple that will resemble your lips.

The battle ends around noon when the crowds are totally drenched, exhausted, and intoxicated. Every year, approximately 50,000 liters of Riojan wine bite the bota bag.

Survivors drag their purple pants back to the Plaza de la Paz (“the Square of Peace”) for a not so peaceful offering.

Bullfights with a twist

The evening bullfights take place in the town’s local ring, leaving the youth to demonstrate their agility and bravery amongst the local heifers.

Locals want to make sure they aren’t cowardly and go mano-a-mano in the ring with the heifers. It’s not a fight to the death, but to mostly laugh at the youth filled with liquid courage getting trampled by the smaller vaquillas.

Just when you’ve had enough outcomes more wine and tapas to finish off your day. Large bonfires go up and the rest of the day is spent eating and drinking in the typical Spanish fashion.

While the wine battle is just a day, this part of Spain is beautiful and worthy of an extra day or two to either rest up, or nurse your hangover in the countryside.

Learning Spanish: How similar are Spanish and Romanian?

Spanish: The 10-day beginner challenge for your next holiday